We wanted to put something together from our 2011 duck season footage for y'all.

Posted by Make It Happen Outdoors at 10:04 AM 0 comments

The two areas are the Stinchcomb Wildlife Reserve at Lake Overholser and at Lake Stanley Draper. I don't visit Lake Overholser much at all as I prefer to fish closer to home with having a family. Lake Stanley Draper on the other hand, I used to live very close to and would visit often. It's not uncommon to see entire heards of deer when driving around the lake. The Oklahoma deer population is not very dense compared to many other states, but when visiting "Draper", they are all over the place. This is somewhat of a problem as the roads around the lake are very curvy and the thick woods often almost meet the road.

The story notes that police are concerned about having hunters in the area, thus sparking criticism of the possibility. Most draw-in locations around the state have a mandatory safety and regulations meeting on top of an entry fee upon being drawn. I have no doubt that the areas would be strictly regulated given the proximity to highly populated areas thus diminishing chances of problematic "hunters". I use quotes due to myself, as a hunter, am a courteous, respectful, and law abiding individual. I would not be bending rules and regulations to up my chances of success. I wouldn't be hunting on land that isn't designated for bow hunting or hunting there if I wasn't drawn. Most hunters would feel and do the same. Unfortunately, not all individuals that call themselves hunters have a sense of self-policing and morals.

The Last Lure My Great-Grandfather Used

I was cleaning up some of my fishing gear this morning and found the last thing I have of my Great-Grandfather's. This lure was the last one I remember him using when I was about 4 years old. It sticks in my head because of what it's made to replicate, a peanut. My Great-Grandfather live in Panama City, Florida where peanuts are big business. I did some research and believe it's a "Jimmy Carter Peanut Lure" from the 70's. 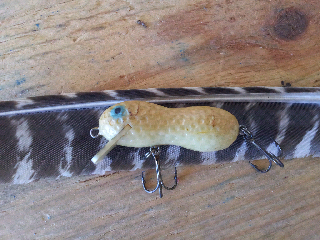 Posted by Make It Happen Outdoors at 12:13 PM 0 comments